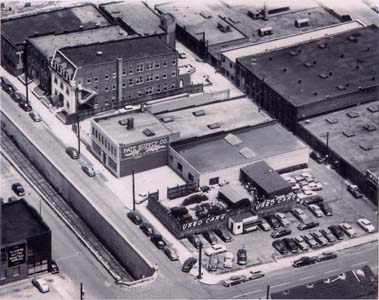 Aerial view of predecessor to Nathan & Nathan headquarters in 1940s.

From 1991 to 2002, Nathan & Nathan was headquartered on the third floor of the Massey Building, a nine-story historic structure that had been newly renovated, beginning a wave of historic renovations in downtown Birmingham.

In 2002, the firm had outgrown its offices, and it joined several other businesses and professionals in redeveloping a portion of the Birmingham Automotive District, an area recently designated a National Register Historic District. (See Birmingham News – March 21, 2002). The firm acquired the old Pate Building/V&W Supply Building, a 1921 structure in true need of modernization. Though the building was totally gutted, the designers were careful to retain most of the historical attributes unique to that architectural era, while creating the infrastructure for a technologically advanced legal facility. The firm was rewarded for its historic renovation as the Birmingham Historical Society honored the developers with the 2003 Birmingham Preservation Award for Preserving Historic Features.